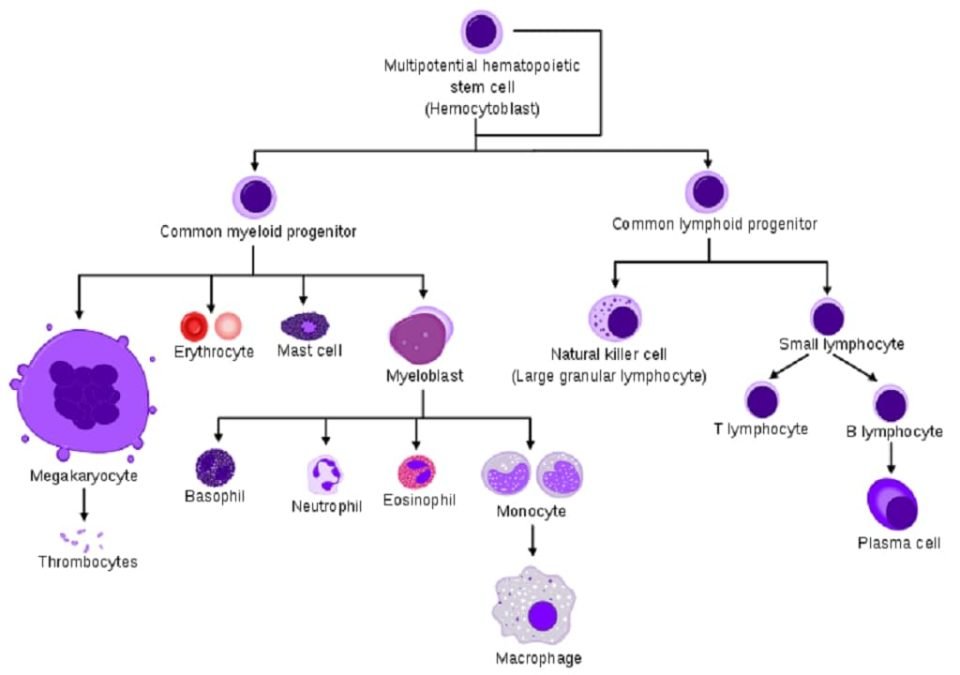 Hey, Good to see you here 😀 …… In this Article, we’re gonna discuss the Formation of Various Blood Cells….. If you have any queries, don’t forget to mention in Comments…Thanks

What is the hematopoiesis ?

Hematopoiesis is the production, Development and the maturation of various cellular components of the blood

The cellular components of blood are developed from the Hematopoietic stem cells also known as Pluripotent Stem cells or totipotent stem cells which further differentiate and mature into typical blood cells.

The production of erythrocytes is called as Erythropoiesis; the leukocytes are called as Leucopoiesis and that of platelets is Thrombopoiesis.

Leucopoiesis is further subdivided into –

What are the Sites of Hematopoiesis ?

It is the process of formation, development, and maturation of Red blood cells in the bone marrow.

Reticulocytes are called as the juvenile RBCs or Immature RBCs.

Reticulocytes spend 1-2 days in the marrow than 1-2 days in circulation where it gets mature into Erythrocytes and attains biconcave shape.

It is the process of formation or production of leucocytes which normally occurs in the blood-forming tissue of the bone marrow. There are 3 independent series, which leads to the formation of 3 different types of white cells –

The formation of White Blood cells is regulated by –

Granulopoiesis is the process of formation or production of Granulocytes that are the  type of White blood cells that contains the granules in their cytoplasm, which begins at the Myeloblast and passes through the stages of a Promyelocyte, Myelocyte, Metamyelocyte and Band cells and ultimately results in the formation of 3 types of Granulocytes – Neutrophils, Eosinophils & the Basophils.

Lymphopoiesis is the process of formation or production of Lymphocytes, a type of white blood cells that lack the granules in their cytoplasm, which begins at the Lymphoblast and passes through the stage of Prolymphocyte and ultimately results in the formation of mature Lymphocytes.

Monopoiesis or Monocytopoiesis is the process of formation of production of Monocytes, a type of White blood cells that lack the granules in their cytoplasm, which begins at the Monoblast, passes through the stage of Promonocyte and ultimately results in the formation of mature Monocytes.