Home » DIFFERENCE BETWEEN » Top 15 Difference Between Serum And Plasma 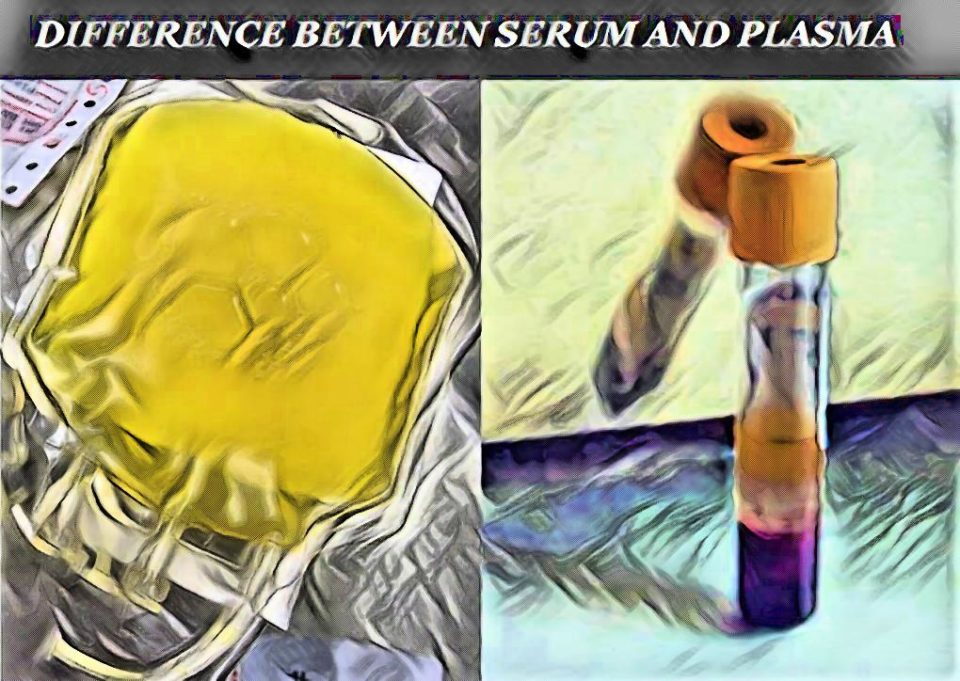 Hey, Good to see you here 😀 …… In this Article, We’re gonna discuss the various differences between serum and plasma….. If you have any queries, don’t forget to mention in Comments….. Thanks

The most confusing terms ever made in the Hematology might be the Serum and Plasma which are so frequently used in every assay we perform in the laboratory or whether taking theory lectures, these terms are used everywhere and are not limited to hematology but also frequently used in Biochemistry and Serological studies.

Blood comprises about 7-8% of a person’s Total body weight and consists of Liquid and Solid Parts. The Solid part is mainly the cellular components comprises about 45% of total blood volume which consists of Red Blood Cells, White Blood Cells and Platelets whereas the Liquid part that comprises 55% of Total blood Volume, contains so many substances including dissolved nutrients, Vitamins, minerals, waste substances, nitrogenous products etc. in Water.

The Serum and plasma, both are the Liquid components of Blood and we can easily get both the things from the person’s Blood. In most simple words Serum is the liquid part of blood that is devoid of Clotting factors and Cellular components whereas Plasma is the part of blood that only devoid of Cellular parts rest of the things are present in Plasma including Clotting factors.

In the blood vessels of a Living Person, the Blood consists of Cellular part and plasma i.e. liquid part of blood containing Clotting factors but when, somehow, you get injured that clotting factors are activated by a mechanism that forms a clot at the site of injury to prevent the bleeding and blood loss.

Now an Interesting question arises that why blood doesn’t clot inside our body but once it is out it forms a clot within few minutes and that too in the presence of anticoagulant (Heparin – natural anticoagulant present in blood)???

The Answer to this question is quite simple and various theories were proposed for this. In Layman language….. In our body, the blood is in Motion or in a mobile state, the heart is continuously pumping out the blood but when it is out of the body in a vial or vessel, it’s in a stationary position as well as the exposure to the external environment activates the Clotting factors that result in the formation of a Clot….

The compositions of Serum & Plasma is almost same as both contains Glucose, Hormones, Electrolytes, Antigens, Antibodies, Macronutrients, Micronutrients, and other substances except for the Clotting factors which are present only in the plasma and not in Serum. You can easily remember this with a simple equation i.e.

If we talk about the separation of Serum and Plasma from the Blood, then the difficulty level is almost similar, however, if we are going to separate serum then we have to be more patient because it takes some time for the formation of an ideal clot to get a pure serum.

On the other hand, to obtain plasma from the blood we need to add proper anticoagulant to the Blood as per the Tests to be performed and that too in an appropriate proportion to avoid any error in results.

That’s All about the major Difference Between Serum and Plasma.

Check out the Morphology And Culture Characteristics Of Yersinia pestis (Y. pestis)