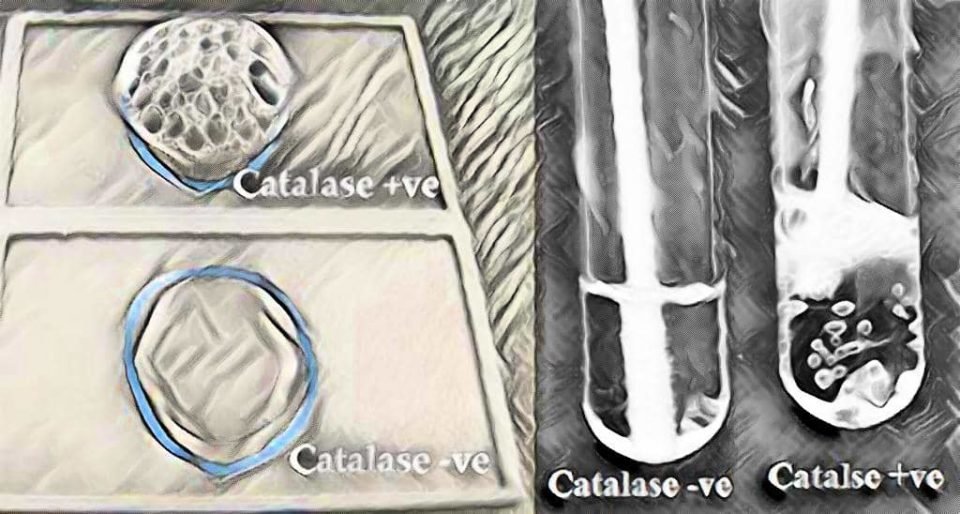 Hey, Good to see you here 😀 …… In this Article, we’re gonna discuss the Principle, Procedure, Uses, and Results of Catalase Test ….. If you have any queries, don’t forget to mention in Comments…

Catalase is one of the most common enzymes found in almost all the living organisms that need oxygen to survive (such as bacteria, plants, and animals).

This enzyme basically catalyzes the decomposition of hydrogen peroxide (H2O2) to water and oxygen molecules.

Catalase is an essential enzyme in protecting the living cell from oxidative damage which usually caused by reactive oxygen species (ROS).

What is Catalase Test?

Catalase test is one of the three most important tests used for the identification and differentiation of bacterial species in the microbiology laboratory.

This enzyme counter affects the bactericidal action of hydrogen peroxide (H2O2) and protects them.

Anaerobic & Facultative Anaerobic microbes which only ferments and do not respire using oxygen (for e.g. Streptococci) generally lack this enzyme and are Catalase test Negative.

The principle of Catalase Test

As we already discussed, Catalase Enzyme mediates the breakdown of hydrogen peroxide (H2O2) into oxygen and water. This reaction is the basis of Catalase test.

To check out whether the isolated bacteria or microbe produces Catalase Enzyme, a small portion of isolated bacterial colonies is mixed into hydrogen peroxide solution (usually 3% H2O2) and is carefully observed for the rapid elaboration of oxygen bubbles in the mixture.

The bubbling is due to the release of Oxygen gas into the mixture which indicates that the organism is able to produce Catalase enzyme and the catalytic action of the enzyme on H2O2 is completed.

In another case, if the microbe is unable to produce Catalase Enzyme, the reaction is incomplete and no bubbling is observed.

Sometimes In Facultative Anaerobic Organisms, the production of oxygen bubbles is weak, these organisms are called Weak Catalase Positive.

What is the Various Concentration of Hydrogen Peroxide (H2O2) used in Catalase test?

Most Commonly 3% hydrogen peroxide (H2O2) Solution is used in routine testing and identification of Aerobes.

For the identification & Differentiation of Anaerobic bacteria, 15% Hydrogen Peroxide (H2O2) solution is used in Catalase test.

What are the Uses of Catalase Test?

Catalase test is most commonly used to distinguish the genus and species of Gram-positive cocci (Round shape bacteria. For E.g. – the Staphylococcus like species are Catalase Positive whereas the other GPC bacteria like Streptococcus and Enterococcus are Catalase negative.

A rapid Semi-quantitative Catalase test is used for the identification of M. tuberculosis.

Now I am gonna explain two methods that are commonly used for the Catalase test in the Laboratory. You can use any of the methods as per your convenience….

Take a clean, dry and grease free microscopic glass slide and place a drop of 3% H2O2 onto the slide.

Note: At one time you can easily perform Catalase test of 2 or 3 specimens on a single slide so divide the space accordingly and Place the H2O2 drop in the center of the divided portions of the slide.

Now, transfer a portion of the isolated bacterial colony to the drop of hydrogen peroxide on to the glass slide using a sterile inoculating stick.

Mix well the specimen and H2O2 drop on the slide.

Carefully observe for the evolution of Bubbled in the mixture on the Glass slide.

Take a Clean, Dry and sterilized Laboratory test tube and add 5-7 drops of hydrogen peroxide (H2O2) Solution in it.

Now, pick a small portion of the isolated bacterial colony using a sterile wooden applicator stick and carefully place it into the test tube.

Finally, observe the tube against a dark background for immediate bubble formation at the end of the wooden stick in the test tube.

Results of the Catalase test

Observe the reaction mixtures carefully for the formation of bubbles or effervescence.

Precautions to be taken while Performing Catalase Test

For the Catalase test, do not use the metallic needle or loop (inoculating loop) because metals can react with Hydrogen peroxide and may give you the false positive results of the reaction.

Another thing is that be very careful if you are picking up the isolated colonies from the blood agar as the red cells present in the blood agar medium are Catalase positive and may give the false positive results.

Also, there are certain bacteria which possess many enzymes besides that of Catalase and are able to decompose the hydrogen peroxide into oxygen and water similarly to that of Catalase but these reactions are usually time taken and the bubbles of oxygen are usually produced after 30 seconds so carefully observe the reaction and precisely note the time of reaction unless you may get false positive results.

Dispose of your test slides and inoculating stick/loops in the respective biohazard disposal containers as per the norms.